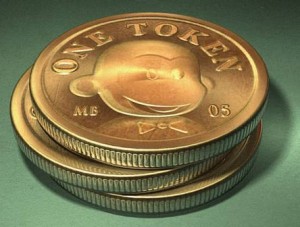 What is Token Economy?

A token economy is a system of behavior modification based on the systematic positive reinforcement of target behavior. The reinforcers or rewards are symbols or tokens that can be exchanged for other reinforcers. Token economy is based on B.F. Skinner’s principles of operant conditioning (or stimulus-response conditioning) and can be situated within applied behavior analysis or behaviorism.

The Psychology of Rewards
In the token economy system, the basic premise is that reward drives behavior – the carrot and stick formula.  Thus, when applied to social loyalty program, we reward the consumers when they respond appropriately to a behavior we want (e.g., refer your store to 10 more friends) and not reward them when they don’t respond accordingly.  However, paradoxically, while a big reward reinforces desired behavior better than a small reward, when rewards are discontinued, those who have received big rewards are more likely to return to the old buying pattern than those who received small rewards.   So make sure NEVER let your best customers feel that you are withdrawing privileges from them.

There are several ways of tracking or monitoring customers' purchases in order to later provide them with a reward especially now that the Social Loyalty Program is available on Facebook.  Whether the reward is a simple discount, a more targeted discount, points which lead to a gift from a catalogue or later money-off offer, or even extra services, there has to be some means of recognizing each customer at the point of sale. This is usually an identifying token or badges that the customer presents when making a purchase. So when applied to the Social Loyalty Program, the rewards (stimulus), in theory, are not only aimed at eliciting the right behavior (response), but also should reinforce it so that it ultimately becomes part of the consumer’s shopping psyche.  However, eliciting the right response is not just the function of the rewards offered, but all also includes a lot of other factors including the overall buying experience such as frequency of rewards, ease of use, emotional value of the rewards, and the like.

The Necessity of a Social Loyalty Program

By being the member of a loyalty program, the consumer by default becomes part of a larger community. Like every group, this community is also guided by certain norms and rules-predominantly set by the business that owns the program. The points accrual and redemption system forms the basic rules while the repeated strategic promotions that have a different set of rules become the advanced rules to get the members of the community to keep coming back. In a successful loyalty program, while the community formation is the first step, the successful conversion of the members into a “psychological-crowd” remains the key.

Psychological crowds are by nature extremely prone to the power of suggestibility. This vulnerability towards suggestion can be achieved by constant and relevant communication.   Thus, social loyalty program available on social media networks such as Facebook becomes very powerful and effective because of the availability of the community management system while keeping operating costs very low.  In marketing terms, the tactical and strategic promotions that are used to constantly communicate to the members serve the function of active suggestion. The online physical and emotional proximity between the members can be achieved by creating activities such as a family day-out, movie premiere, tickets for a play etc. These activities re-assure each member that there are many of people out there who think, behave and feel like them thus, validating their membership to the group.

What applies to an individual applies to a group.  Hence, successful loyalty programs are those that leverage the emotions that guide human behavior and channel them towards limited behavior modification resulting in regular and incremental financial returns for the business. The human mind craves for routine and any incentive that allows one to profitably) continue dealing with the store or business through rewards and incentives is the winner.

Loyalty programs are dictated by market dynamics. It is no longer a luxury but a necessity and a vital tool for survival for any business across industries. This is easy to understand when we realize that the market resides nowhere but in the collective consciousness of consumers.

It follows that the reward is a crucial part of any loyalty program. It has to be desirable enough to change the behavior of customers. In fact, if the reward is really well chosen, it will be attractive to the target group of customers, and not attractive to customers who are not really valuable to the business. It also has to be affordable, and balancing the two sides of the desirability/affordability equation is tricky. Next week, we will examine the key functions of a loyalty reward, offering sound advice on what consumers might value, and what might disappoint them. It also walks you through the properties or attributes that are always found in successful loyalty rewards.

If you like to be contacted about how a cloud-based Social Loyalty platform can improve the customer experience and enhance the revenues of your organization or your clients, please fill out the form on the right.