In a recent SMB Digital Marketing 2012 held in Chicago sponsored by BIA/Kelsey SMB Digital Conference, one of the major headlines is that Social Loyalty is the Next Big Marketing Strategy of 2013.  Social Loyalty Apps such as http://socialloyaltyapps.com/ convert “likes” into “leads” and  leads into loyal customers.  The chart below shows where small business owners are putting in their marketing budget.

According to eMarketer, the  new report, “Social Loyalty: From Rewards to a Rewarding Customer Experience,” analyzes findings from dozens of third-party research providers and interviews with industry executives.  Here are some of the best practices for improving social  loyalty.

Why? Because many traditional loyalty programs are not highly effective, eMarketer notes. While loyalty programs have been popular in the US for years—with the average American consumer belonging to 18 loyalty programs according to loyalty marketing publisher COLLOQUY—it is not clear how many of these consumers are actually active.

eMarketer further notes that points, coupons and freebies are great for grabbing initial attention.  But in the long run these promotions can’t make up for a lackluster customer experience. However, through the use of social media, retailers and brands can identify and interact with the most profitable internet users.  And for the first time ever, social networks such as Facebook makes it easier for businesses to acquire new customers through social loyalty programs.  Why?  Loyalty can be won through encouraging word-of-mouth and creating advocates or evangelists, by raising a user’s social status, by surprising and entertaining shoppers in unexpected ways and also by listening to customers’ needs and suggestions and responding in a mutually beneficial fashion.  Brands that most often succeed typically encourage sharing, raise customers’ social status, develop highly entertaining loyalty programs, and listen and respond to feedback quickly.  Social loyalty programs provide brands with an unprecedented amount of customer data, both online and offline.

For companies looking to drive business online, lots of time and money is invested in lead generation. But what do you do when the leads start flowing in?

Though leads follow up may sometimes look daunting, successfully following up on a lead and starting the process that will take it to a sale doesn't have to be a trying and disappointing process.

Here are seven tips for following up on leads effectively.

1. Strike while the iron is hot.

In many cases, a lead is an asset that depreciates in value very, very quickly. Thus, it's worth trying to respond to qualified leads as soon as humanly possible.  This is because your response time will often determine whether you close a sale or lose a sale you could have easily closed.

COMMON SENSE: it's important to read a lead so that you know who you're dealing with and what your opportunity may be.  But the FACT: this doesn't always happen.

To avoid looking unprepared or taking things for granted, it is a tremendous help to create a checklist that your inbound marketers should use as part of the lead follow-up process.

3. Have the right (and preferably same) person respond and follow through from the get go to establish rapport.

To make the most of a lead, ensure that the person best capable of following up on it is the same person who responds. While new prospects may necessarily have to deal with several people throughout the sales cycle, it is often desirable to ensure that their first point of contact is someone they can start to build a rapport, if not a relationship, with.

4. Don't be afraid to pick up the phone

Thanks to technology, phone calls are more and more infrequent for many individuals, especially to younger members of the workforce. However, the phone is still a powerful sales tool and,  if your lead contains a phone number, make a habit of picking up the phone and dialing it.

When speaking with a prospect, walk before you run. Even if your lead came with a lot of detail, it's important to confirm that you have a good understanding of what the prospect needs and haven't made any assumptions that could unnecessarily limit your opportunity, or ruin it altogether.

In every aspect of sales and business cycles, expectations are everything and it's never too early to set them. If an initial conversation with a lead confirms that there's an opportunity, take control. Once you're on the same page with the customer and understand his/her needs, you should at a minimum lay out what you think the sales cycle will look like. This includes proposing dates for key milestones.

Not all leads are created equal. Some, unfortunately, are less-than-desirable for a variety of reasons. Nevertheless, assuming that the individual who submitted the lead is a real person, a response should always be provided no matter what. Not only can this help maintain your reputation in the marketplace, it also ensures that you will be remembered  for future opportunities that may be a better fit.

First a disclaimer:  Especially in social media, there are no such things as rules in conversion rate optimization.  What works in one situation may not be the same for another.

Here are 12 brands identified by Econsultancy that used such principles and have worked.  You might want to test them out yourself for your own brand and explore.

One of the most effective things you can bring to your site to increase the confidence of buyers is ‘social proof’. Social proof is the phenomena where people tend to believe that the decision and actions of others reflect the correct behavior in a specific situation.  So, we have to create an experience which convinces our visitors they’re not the only person making this decision. 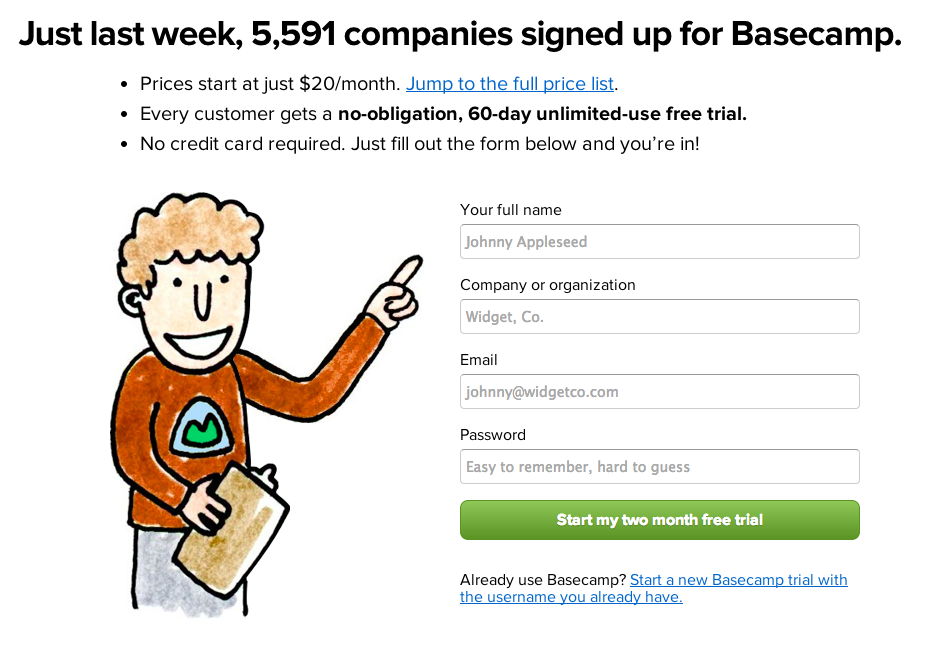 In this design we see a prominent mention of the sheer number of other people who have made the same purchasing decision that the visitor is considering. 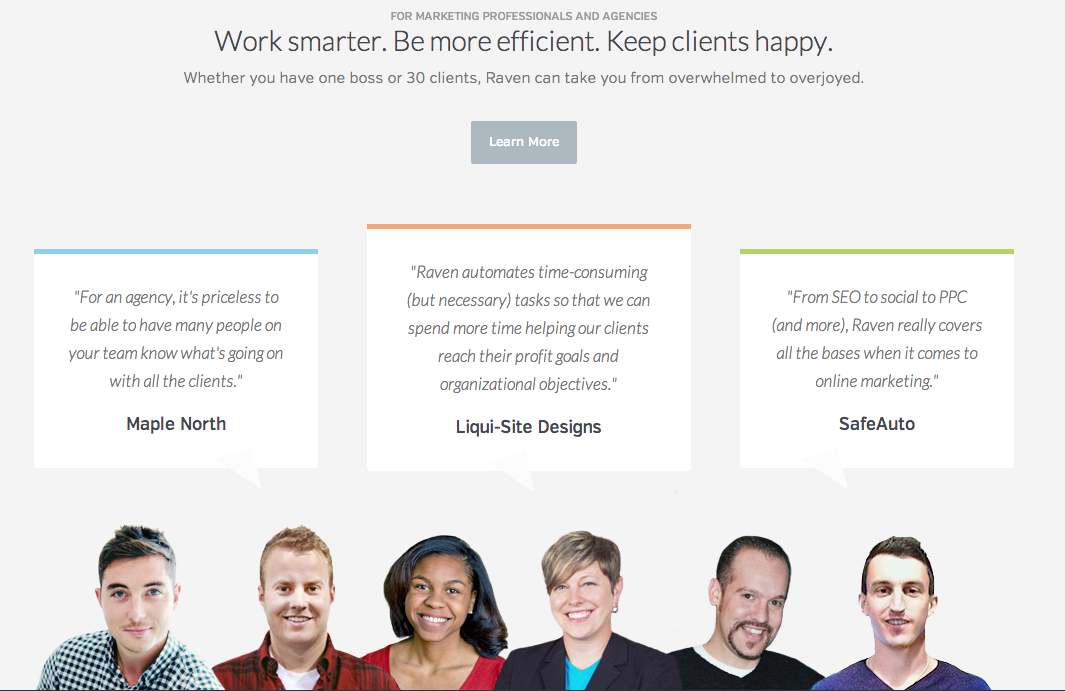 One of the most common ways to integrate social proof into your site is by including testimonials into your site, especially if you can include a picture of the person providing the social proof. Software as a Service (SaaS) companies are the kings of this. But it’s a sensible addition to most B2B sites and can also work well in B2C environments.

There’s a huge number of clever CRO techniques in place on this page but we want to highlight one of the easiest ways to implement social proof into your site, using the off-the-shelf Facebook Like button/widget. It really simply shows you the profile pictures of other people who’ve liked that page on Facebook, also prioritizing those who are connected the to the visitor of the site. 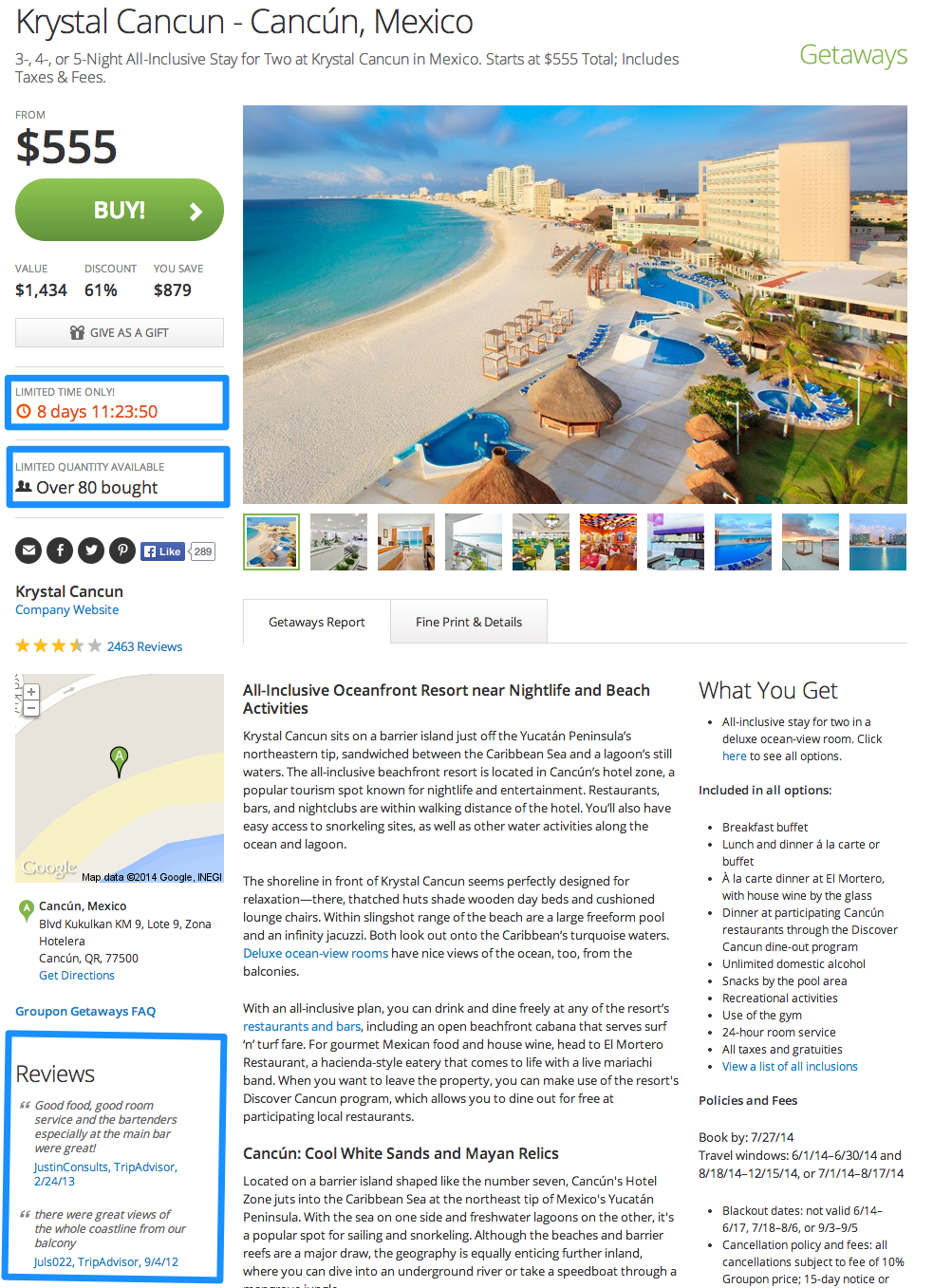 Yes Groupon. It might have been getting a lot of stick recently but it, more than nearly every other major internet business, has a deep understanding of human behavior. Here it illustrates how they’ve built social proof into the very DNA of its business.

By showing how many other people have bought the same offer,  Groupon hopes to persuade the visitor to do the same, and place an order.

The disutility of giving up an object is greater than the utility associated with acquiring it.  This  is known an Loss Aversion. ‘Disutility’ simply means that human tendency prefers not to lose  something more than we love to gain something. Sometimes this is about a subtle re-framing of your copy to concentrate on loss rather than gain. We need to ask ourselves ‘How can we make visitors think they’d be losing something if they don’t buy?’. 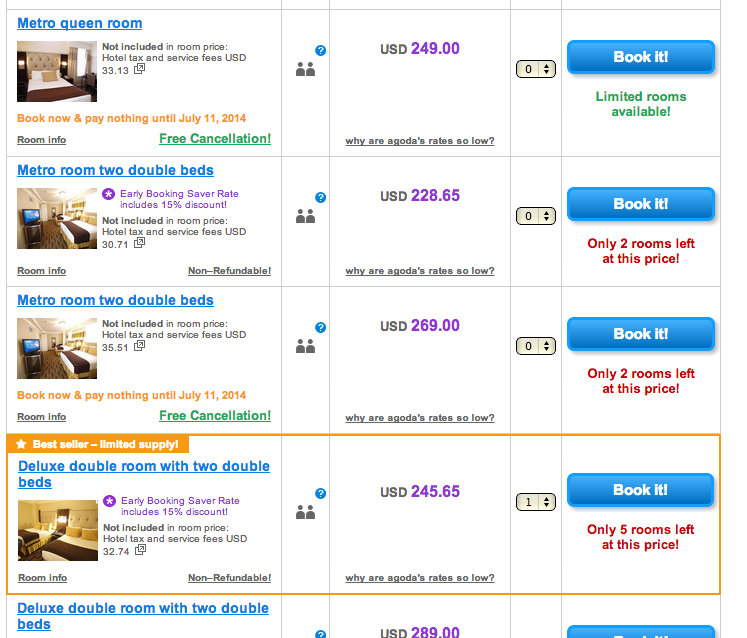 Many travel websites are particularly good at communicating loss aversion.  A good example is Agoda. It makes it clear what you would lose if you don’t book now. This serves to instantly increase urgency.

Qwertee has built an understanding of human behavior right into its business model. Its t-shirts are only available for 48 hours and after the first 24 the price increases. Every time you visit the site  there’s a huge ticking clock showing exactly what you’re going to miss out on if you don’t purchase soon. 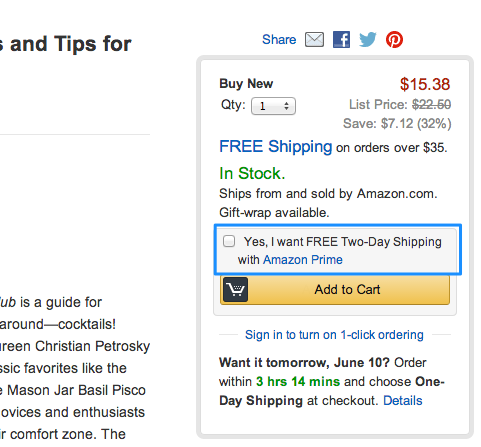 Amazon is the king of using cognitive biases to increase conversion rates. One particular example where it uses loss aversion is for its ‘Prime’ customers. Prime users are a subset of their most frequent customers who have paid upfront fees to have access to next day delivery by default. If you’re a signed-in Prime customer, every product you visit that has next day delivery reminds you how long you’ve got before that day’s cut-off point.

It’s not just online giants like Amazon making use of our innate loss aversion to increase purchases. High street retailer Argos taps into our aversion to loss to drive footfall to its shops using this clever lightbox.

One of my favourite cognitive biases that influences the way behave, is known as anchoring. It is the tendency to rely too heavily – or ‘anchor’ – on a past reference or on one trait or piece of information when making decisions. These anchors can often be numerical. Our challenge is to ask ‘How can I reference an ‘anchor’ that influences visitors to my site?’.

One of the oldest anchoring tricks in the book is what the price was reduced from. Cross-hatched higher prices showing the available discount is a simple way to anchor the price of an item and make it seem better value.

SaaS companies like MailChimp often make use of a clever anchoring technique that more businesses should be wise to try and use. You’ll notice they have one high price that’s much higher than all the other price points. This maybe be because it’s a popular option.  However many anchoring experiments have found introducing one higher price point can lead to people spending more in total even if nobody chooses that option.

This concept is worth repeating because it is a bit counter-intuitive: Adding an extra expensive option to your page can increase the average order value of the page even if nobody selects that option.  This is because it makes your other expensive options seem less expensive. This is one that’s well worth testing.

There’s also a case of possible anchoring taking place on the homepage of Broadband.co.uk, where the BT offer is significantly more expensive than the other options. That’s because the package is very different to the others. If we believe in the principle of anchoring, this may be increasing the value of the traffic to this page by encouraging them to assess the relative value of the other options differently.

Adding related products to a page can be a great way to increase the number of items people add to a basket. There’s also a possibility that the selection of these products might also have an anchoring influence. We don’t expect too many retailers bear price anchoring in mind with their related product algorithm, but it’s something you would expect some retailers to have tested.

As we noted at the beginning of this article, we don’t always know in every case that these changes have been implemented to increase conversion rates.  However,  if we understand human behavior and some of our cognitive biases, they would certainly seem worthy efforts to try.